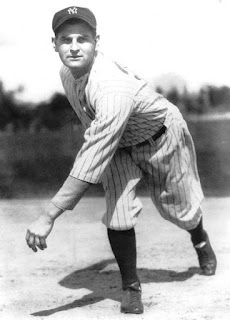 Philadelphia native, Philip Walter "Lefty" Weinert, pitched for parts of six seasons in the major leagues, was a regular with the Phillies in 1922 and 1923, was the first Jewish player to appear for the Chicago Cubs in 1927, and was a teammate of Babe Ruth and Lou Gehrig on the 1931 New York Yankees. He may be best remembered today, however, for being the pitcher who, on May 7, 1923, was attacked by a raging Casey Stengel during a game at Baker Bowl.

Weinert signed with the Phillies right out of West Philadelphia High School and spent most of the 1919 season with the Reading Coal Barons in the International League. Despite a 6-15 record at Reading, Weinert made his major league debut with the Phillies that year on September 24 at the reported age of 17.* He worked four innings in relief and gave up 11 hits and nine runs.

Lefty spent parts of 1920 and 21 with the Phillies, and finally made the team as the fourth starter in 1922. On September 27 of that year, he pitched one of the finest games of his career, a 10-inning complete game victory at the Polo Grounds over the World Champion New York Giants, winning 5-3. Weinert scattered eight hits and allowed just two earned runs. Teammate Russ Wrightstone won the game with a home run in the tenth.

On May 7, 1923, Weinert was called into a game against the Giants at Baker Bowl in the top of the first inning. Lee Meadows, the Phillies starting pitcher had already given up five runs without recording an out. Weinert worked his way out of the inning, allowing one more run. The Phillies were behind 6-0 before coming to bat.

In the second inning, Weinert got the first two outs, when Casey Stengel came to the plate. It was the first time Weinert had ever faced Stengel. At this point in his career Stengel, a left-handed batter, was platooned and rarely faced left-handed pitching. Weinert and Stengel had been teammates for a brief time in 1920 and 21 with the Phillies, before the Phillies traded Stengel to the Giants. Stengel was not a happy player with the Phillies and whether there was any bad blood between Weinert and Stengel is not clear. At any rate, Weinert promptly plunked Stengel on the shoulder with a pitch. An unhappy Stengel took his place at first base. The New York Daily News reported that Weinert hit Stengel "accidentally."

Weinert singled and scored on a Walter Holke double in the second, but the Giants got to Weinert for three more runs in the third and the score stood at 9-1 as the Giants came to bat in the fourth. With one out Stengel came to the plate again. The first pitch was high and tight. Stengel had seen enough. He threw his bat at Weinert and then charged the mound, and, according to the Jewish Baseball Museum, was spewing anit-semitic epithets on the way.** Weinert met him as he came out and "after a brief exchange of taunts" the two grappled and hammered each other with body blows as their teammates tried futilely to break them apart. Finally, four of Philadelphia's Finest had to come out of the stands to break up the fracas.

Both Stengel and Weinert were "banished in disgrace by umpires McCormick and Derr." The Giants eventually won the game 13-8. After reviewing the umpires' report on the fighting incident, National League President, John Heydler, suspended Stengel for 10 games. Weinert was not suspended. Whether this incident earned Stengel a place in manager John McGraw's doghouse, or whether he was injured in the fracas is not known, but Stengel did not start another game for the Giants for two months.

Weinert had a tough 1923 season going 4-17 with a 5.42 ERA for the last place Phillies and labored in the minor leagues for most of the next three seasons. He resurfaced in September 1927 with the Chicago Cubs. In his first outing for the Cubs he pitched a complete game, beating the St. Louis Cardinals, 6-1. The only run he allowed was unearned. It was the closest Lefty ever got to a major league shut out. The Jewish Baseball News reported that this was the "very first Jewish appearance" for the Cubs franchise.

After pitching for the Cubs again in 1928, it was back to the minors for Weinert, until he was purchased from the Louisville Colonels by the New York Yankees in 1931. Weinert pitched in 10 games for the Yankees before being released again. He hung on for a few more years in the minors before finally hanging up the spikes after the 1936 season.

Still calling Philadelphia his home, Weinert was hired as the baseball coach for Villanova College in 1946. He coached the  Wildcats for four seasons and was later a scout for the Phillies, Dodgers, and Indians. He retired to Florida, where he was killed in an automobile accident in 1973. He is buried in Lakeview Memorial Park in Cinnaminson, New Jersey just across the bridge from the site of the old Baker Bowl and his famous brawl.

*While most reports show Weinert was 17 at the time and born in 1902, his grave marker indicates he was born in 1900, which would mean he was actually 19. This makes sense since he had graduated from high school the year before.

**I could not independently corroborate this. Newspapers reported verbal taunts, but did not specify the character of the taunts. You can read what the Jewish Baseball Museum reported here.

Older Post Home
Subscribe to: Post Comments (Atom)
This blog is intended for every baseball fan and especially every Phillies fan. Rooting for the Phillies is not a job for the faint hearted. I will explore the checkered history of the club, the highs and lows, the great players and the not so great players, the reasons to cheer and, yes, because this is about the Phillies, the reasons to boo.